In response to recent COVID-19 concerns, we are writing to assure our clients that we are taking recommended precautions. Read More

Would you like to switch to the accessible version of this site?

Don't need the accessible version of this site?

In appreciation of their incredible sacrifice and service and our desire to give back to our United States soldiers, we are offering FREE CHIROPRACTIC TREATMENT FOR ONE YEAR to returning military personnel who have been deployed in the current Iraq or Afghanistan conflict. 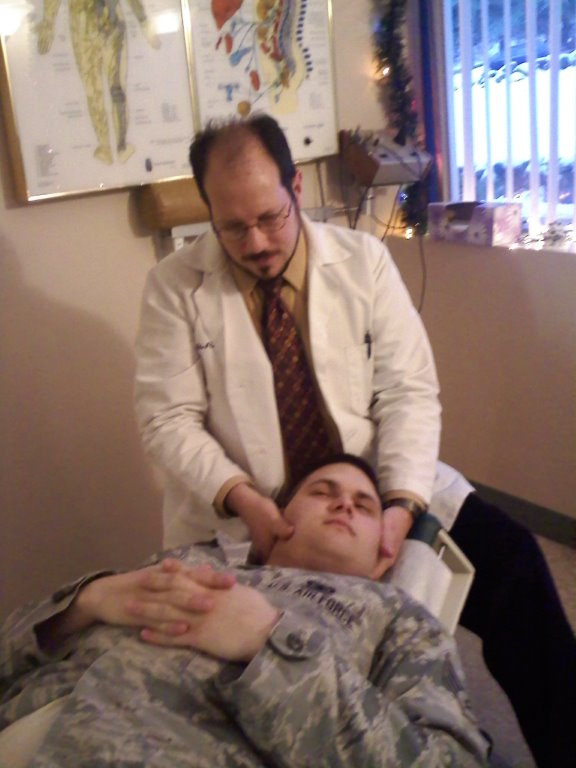 Beginning July 4, 2008, Dr. Joe launched Acton Chiropractic’s Military Care Program. This program offers free Chiropractic treatment for up to one year for returning military personnel who have been deployed in the current Iraq or Afghanistan conflicts.

This offer includes all medically necessary Chiropractic consultation, physical examination, x-rays and treatments
*Deployed personnel only are eligible
This is our way of saying “Thanks” for Protecting Our Country
Today’s veterans are coming home and struggling to return to civilian life. There are very few services available for them during their transition. Muscles injuries are common and attributed to years of physically abusing their bodies in service of their country. Poor sleeping conditions, training exercises and wearing heavy equipment lead to cumulative trauma disorders and repetitive stress injuries. Chiropractic care can help. However, the military health insurance plans don’t include Chiropractic benefits. The Military Care Program is our way of saying “Thank You” to the courageous men and women of the U.S. Armed Services.

Thank you very much for reaching out so generously to returning war veterans. Your program of offering free chiropractic services to veterans for one year is very generous and my office has already received positive feedback from one veteran saying how much you have helped him. It is great to see people taking action so selflessly to improve the lives of others especially when those other people are worthy of our respect.

The compassion and kindness that you have shown by offering your services for free is outstanding and I can only hope that other people in our community follow the remarkable example that you have set. Veterans coming home from overseas deserve the support of their communities and residents of the 5th district. I am honored to serve you in Congress. 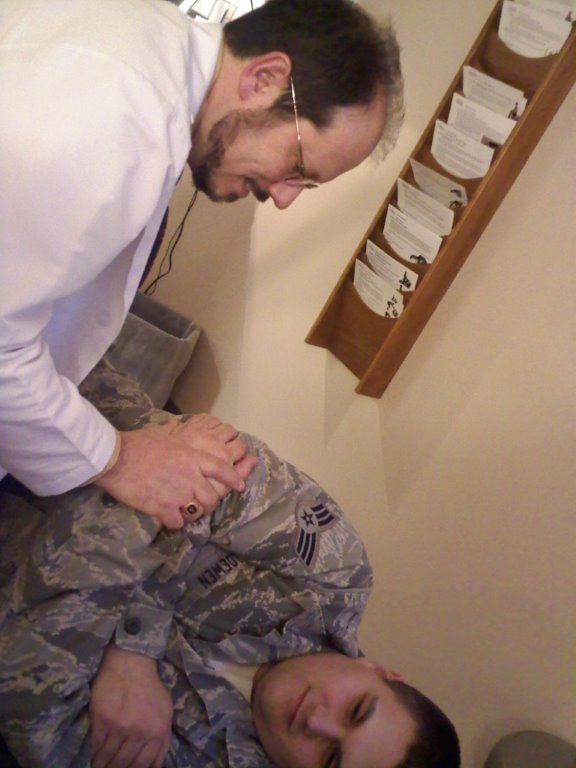 If even habitually carrying a wallet or purse on the same side can lead to back problems, lugging a 200-pound rucksack through the battlefields of Iraq and Afghanistan can wreak havoc on a soldier’s spine.

That’s why Dr. Joe FitzPatrick, owner of Acton Chiropractic & Rehabilitation, joined a growing number of chiropractors around the country who are offering free services to veterans returning from active duty. Beginning July 5, 2008, any serviceman or women deployed to Iraq or Afghanistan is eligible for a year’s worth of spinal adjustments, rehabilitation and even X-rays.

“I thought it was a great idea to help soldiers transition back into civilian life,” said FitzPatrick, sitting in ihis 526 Main Street office. “I’m not a big fan of this war, but I am a fan of the soldiers.”

FitzPatrick said that veterans often return from combat with many of the same ailment as typical patient might present—such as headaches, neck and back pain and carpal tunnel syndrome—but to a much greater degree.

“They’re dealing with a lot of the same things everybody is,” said Fitpatrick. “They’re under a lot more strain than us so there’s a greater need fo rsoldiers than the rest of us.”

Still chropractic cservices are not always available under military health benefits, something FitzPtrick hopes will change in the near future. 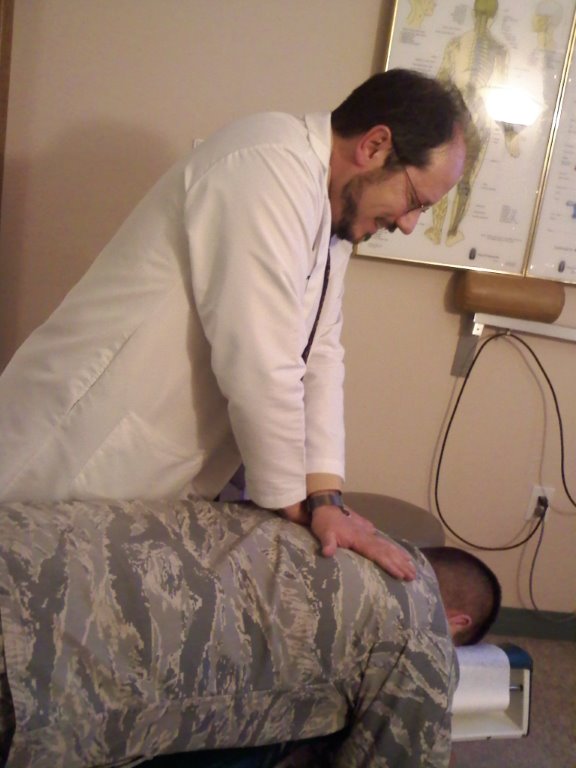 Since announcing the new program last week, one veteran has signed up for the program and another called from Kansas City to thank FitzPatrick for reaching out to returning soldiers.

Joe Carlson, a sergeant in the Massachusetts Army national Guard out of Reading and a patient of FitzPatrick’s for the past three years, also applauded the program.

“I think it’s awesome,” said the 24-year old, dressed in fatigues and tan combat boots. “A lot of soldiers first coming back…need all the help they can get. A year of chiropractic care is fantastic.”

Carlson has not been deployed to a war zone, but has suffered some of the same physical strains of wearing a 50-pound flake jacket, rucksack, rifle and ammunition He first came to FitzPatrick at the suggestion of his wife, Amanda who is a chiropractic assistant at the clinic, complaining of headaches and lower back pain. The results, he said, have been enough to convince him to recommend FitzPatrick’s services to other soldiers.

“I’ve got no headaches anymore, at least until my kids start screaming,” he laughed.

FitzPatrick is quick to admit he can’t take credit for the idea of offering free services to veterans. He first heard about the idea a few months back from Dr. Jean–Marc Slak, of Slak Chiropractic Group in Burlington.

Slak, himself, picked up the idea after hearing about others offering similar programs in other parts of the country. He started his program last Veterans Day and started urging his colleagues to follow suit.

“It’s really a nice thing to help people who have been out there serving our country and putting it all on the line,” he said in a telephone interview. “They’re wonderful people.”

Since beginning the program, Slak said he has treated about four veterans.

Slake said that chiropractors are especially equipped to help soldiers recover from lasting ailments, such as back pain, thta resulted from being in combat or simply from the rigors of day to day life in a war zone.

“The nervous system controls everything, including healing. If there are distortions in the spine, it creates interference,” he said. “If you interfere with that, you lose the ability to maintain optimum health.”

FitzPatrick isn’t sure how many soldiers will ultimately take advantage of his offer, but he is confident that it will make a difference.

Send Us An Email Today!

Find Out When We Are Open